Ownership and Competition history of the 'black & white car' 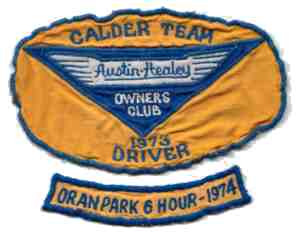 The first '6 hour relay race' contested by the Austin Healey Owners Club NSW, was at Calder Motor Raceway, Melbourne, on 16th September, 1973. Wally had only owned the black & white car for 3 months, and now he found himself committed to driving the car to Victoria to be a part of the inaugural 6 Hour Relay Race team. And getting there was the biggest drama Wal was ever to encounter in his ownership of the black & white car...

In a serious attempt to be organised, Wally and the rest of the NSW 6Hr Healey team went out to Oran Park on the 4th September, 1973, for a Private Practice session. The black & white car - running on radials - with the Detroit 'no spin' Locker diff fitted - understeered 'like a pig'. Wal had never encountered a Detroit Locker before the black & white car - or it's effect on handling. Despite numerous tyre pressure and rollbar adjustments - Wal couldn't 'dial out' the understeer - and, by his own admission - just got frustrated and angry. The result - going over the dogleg, he spun and clipped an armco barrier backwards..... So now the black & white car had a damaged drivers rear guard, a boot that wouldn't close - and Wal had a week to fix it... 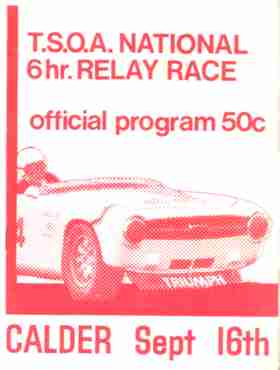 When I bought the car - Wal had said to me - 'if you ever restore the car - there's really only one part of the car that needs someone to sort it out properly - the driver's side of the rear shroud and rear driver's guard..'

This old damage was repaired 'properly' by Colin Rule during the full restoration in 1998.

Anyway - I digress. Wally always drove the black & white car to and from race meetings - even interstate 6 hour relay races. So - in many ways - the car ran reliably for much longer than just it's "6 hour relay race' performances indicate. In the 1973 6 hour race - the black and white car not only completed 180 racing laps of Calder Motor Raceway - but it also drove the 9 hours to get to Calder in Victoria (and another 9 hours to get home...)

Patrick Quinn Esq. has written an article on his memories of this 1973 Calder 6 hour race - and the trials & tribulation of getting there. I hope you enjoy Patrick's recollections of the first ever 6 hour relay race entry by AHOC NSW as much as I did.

Below are some fantastic pictures from the 1973 Calder 6 Hour, taken by long-time member of the AHOC of SA Paul Bradley, who has very kindly provided them to share on this site.

Here is a quick summary of the 6 Hour relay races Wal and the black & white car competed in:

Click the highlighted links below for more history of the black & white car...