This was left in the capable hands of Colin Rule, Coolibah convertibles. I was trying to remember (as I type this) how many Austin Healeys Colin Rule has restored - and how many of these have been concours winners. Then it dawned on me - Colin hasn't ever restored an Austin Healey which hasn't won a concours trophy... The other synergy is that Colin owns the 'ex-Ross Bond' Healey - the Healey 3000 with the most successful Australian racing history of all Healeys - and 'team mate' of the black & white car in 1969.....

So the body & chassis were left with Colin - and I took all the mechanical parts home - for their 'nut & bolt' restoration. Colin's reputation - built up over many years - meant that Colin knew what was correct & accurate - he knows Healeys - and his workmanship is absolutely first class. I wanted the car to be done properly - not just a cosmetic job - bare metal, to the last nut & bolt. It had to keep all its 'trademark' modifications and performance. So thats what happened. It still has its rollbar, extra tacho, triple 45mm webers, detroit locker diff, adjustable rose jointed front sway bar etc. But - it is immaculate. Every nut and bolt on the car was replaced or replated. Every mechanical component was checked, rebuilt, and then meticulously painted. I spent hundreds of hours in the detail. But all this work to restore the car doesn't mean it now just sits in a garage - ready to be trailered to 'shows'. In fact - the black & white car is driven regularly, and has competed in numerous 'club level' motorsporting events (over 20) in the first 2 years since it's restoration. It certainly hasn't come close to Wal's record of putting nearly 2,000 hard miles on the car in a single weekend (driving 10 hours down to Calder, racing for 4 hours in a 6 Hour Relay race, and then driving 10 hours back to Sydney...) - but it hasn't been just sitting in the garage under a cover, either!

Remember that Wally warned me about the rear drivers side shroud
and guard, damaged in a private practice session at Oran Park in 1973?
Here is "Frankenstein's shroud" before (left) - and after... 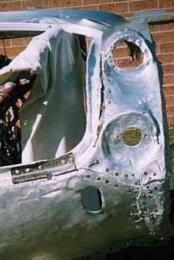 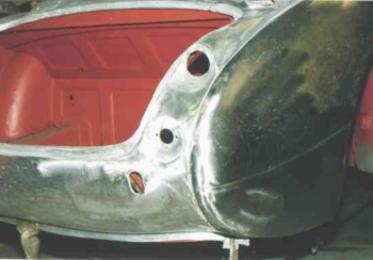 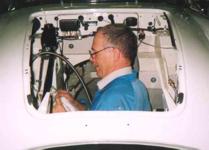 Bare body during final fit up to painted chassis - Col Rule in enginebay. 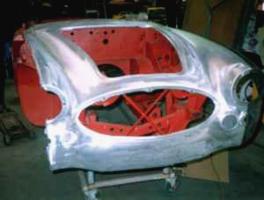 Shroud being fitted up to chassis.
I have many, many more pictures from the body restoration - want to see more? ....Nah - I didn't think you would...