Peter Molloy - 'Uncle Pete' - has been a family friend for almost as long as I can remember. I bought my first Austin Healey 'bugeye' Sprite in the late 1970's - about 20 odd years ago - and remember proudly telling Pete at a family type gathering about this Sprite (which was a real 'disaster' - it wasn't so much a car, it was more a collection of boxes of bits ...). Without hesitation, 'Uncle' Pete offered to build me an engine for my Sprite. He said 'just tell me when you're ready, and I'll build you a quick little engine for it...' Around that era, Pete was actually pretty busy building things like the Moffat/ Bond Falcons which scored the 'formation finish' - 1st and 2nd at Bathurst; the engine for Plus one - which won the Bridge to Bridge powerboat Ski races (Sydney & Grafton); the 750cc bike for Wayne Gardner to win his first major event - the 1979 Castrol 6 Hour Production motorcyle race, and the V8 for Bob Morris to win the 1979 Australian Touring Car championship..... and thats just what Peter achieved in a couple of years in the late 1970's. If I were to attempt to list most of Peter's career achievements here - I'd never get this website finished! Point is - I never actually got around to asking Uncle Pete to build me an engine for that Sprite...

Anyway - imagine Pete's trepidation when I rang (and interrupted his retirement!) to ask if the offer he had made 20 years earlier - the offer to 'build me a Healey engine when I'm ready' - still stood - and if it did - would it apply to a 6 cylinder 3 litre Healey engine!!!!

By the time Pete came down to 'have a look' - the first bits and pieces for the engine rebuild had started arriving from Denis Welch Motors in the UK. I had spoken at length to Denis Welch, and had already ordered Cosworth forged pistons, valves, competition pushrods etc from Denis. When Pete arrived 'to have a look' (he hadn't actually committed to anything at this stage - just that he would 'have a look!!), the engine was in my garage (along with every other mechanical and 'non bodywork' item off the car!). My garage was a total mess. I showed Pete the bits which had already arrived, plus the flywheel & crank which Mike Holloway had organised years earlier, and the Denis Welch catalogue. I think it was the Cosworth Pistons I already had - and the availability of high quality, high performance items for Healey engines from Denis' catalogue - which clinched it. "Sure" said Pete "I'll build you an engine - but you'll need to tidy up this mess if you want me to build the engine here".

So that's how the black & white car has ended up with a 'Peter Molloy' engine. When the restoration of the black & white car was finished - in late September, 1998, it's maiden voyage was to Bathurst, for the 1998 AMP Bathurst 1000. Channel 7 had invited me to be part of their television commentary team for the Healey International Commemorative Races - and I got to co commentate with Alan Moffat. My role was to provide the 'professional commentators' with background and information on the Healey racers, Austin Healeys etc. During the course of conversation about Austin Healeys with Alan, he asked me about my Austin Healey. I told him a bit of the history of the black & white car, and the restoration. Then I said "actually, a guy who used to build race engines for you built the engine for my Healey". Alan looked at me with a wry smile, and said "who could have possibly built you a Healey engine, who also built my engines?" "Peter Molloy" I answered. Alan Moffat nearly fell off his chair... his whole attitude towards me changed... "Your Austin Healey has a Peter Molloy engine in it??" he said incredulously "I'd buy an Austin Healey if Pete Molloy would build me an engine for it! - that has got to be one great Austin Healey - you will NEVER have a reliability problem with a Molloy engine". And, after the Moffat / Bond '1 2 formation finish' at Bathurst in 1977 - when Pete built the Moffat Team engines - and all the other Ford V8's blew up around them - Alan Moffat knows the difference Peter Molloy makes. As I write this - its been over two and a half years (and over 20 competition events) since Pete built my Healey engine - I now know first hand that Alan Moffat was dead right. And - the engine is not only reliable - it also pulls effortlessly from low revs, and it really has some 'grunt'. As my budget didn't run to a forged steel crankshaft (let alone Carillo rods, or an alloy cylinder head...) - Uncle Pete built me a 'genuine' Healey engine which is designed to exploit the legendary torque of the long stroke Healey 3 litre six. Want to see the chassis dyno graphs & printout.

In the end, Pete not only built the engine. He also rebuilt the Healey gearbox (using a straight cut, close ratio Denis Welch gearset); and has also spent many many hours with me setting up the suspension - ride height, corner weights, bump steer, alignment etc. And the best part of all has been that Uncle Pete has always patiently answered my questions, and explained things to me - to ensure I understood 'why' - rather than 'just telling me the answer'. If I can accurately explain to Pete how the car reacts in a corner - he can tell me exactly what has to be done to fix or improve the handling (sometimes this has included 'adjustment' to the car - sometimes 'adjustment' to the 'nut behind the wheel'....) - and I am understanding the principles... Apart from being a very highly regarded mechanical engineering genius (by some of the biggest names in Australian Motor racing) - Pete is also a bloody terrific friend and a great guy. Thanks again Pete - you have been extremely generous to me.

UPDATE: During May, 2001, Pete came down and we removed the sump, and pulled out the oil pump. Several other guys have sheared off their oil pump gear drives (i.e. the cam drive gear which drives the oil pump) - and we felt it was better to be safe than sorry... Guess what? Everything was fine ! With the car up in the air, 150 Watt floodlight in hand, and sump off, Pete inspected the undersides of the pistons, cam lobes etc - everything still looked like brand new. So - it was a waste of time.... but at least we know everything is fine. 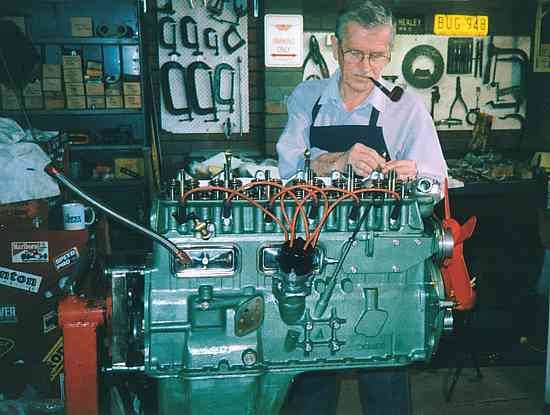 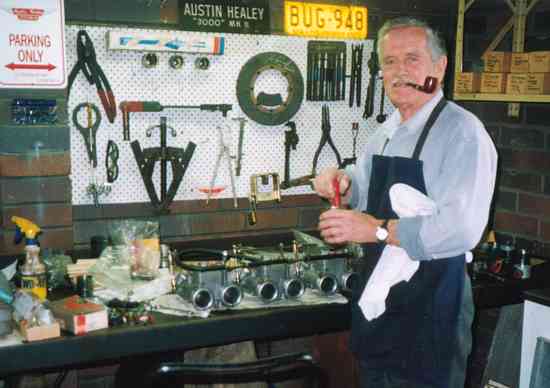 (above) 'Uncle' Pete Molloy building the engine for the black & white car. 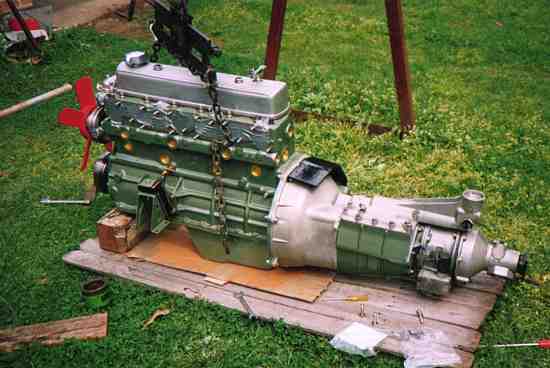 The engine & gearbox (complete with the old 'scattershield') ready to go back in.