The 1998 restoration of the black & white car

Why did the black & white car get restored?

The black & white Austin Healey 3000 was involved in an unfortunate road accident in March, 1988. The Police put the blame squarely on the driver of the other vehicle - who made a right hand turn, directly in front of me, as I was approaching an intersection from the opposite direction. The only reason the accident didn't result in a fatality was that I never spoke to, or approached, the driver of the other vehicle... if I had - there probably would have been a fatality....

So, like many restorations - before the accident, this restoration never needed to happen. The Healey was running well, had no rust, and still looked great. But, once the car started to get pulled apart for the accident repair - I weighed up my options. My preferred 'option' was for the accident to never have happened..... Before the accident, I had a very good example of an unrestored Austin Healey 3000 MKIIIA - with all the patina of it's racing history. Unrestored Healeys in very good condition are getting extremely rare - especially a car with all the history the black & white car has.

The car went to Coolibah Convertibles, run by Colin Rule, who quoted on the repair. My insurance company, Shannons, assessed the accident damage and agreed the repair quotation. A full 'nut and bolt' restoration of the black & white car was sort of planned for about 10 years time (about when it would have been actually required....) - but maybe 'now' was becoming more appropriate...

I discussed this with Shannons, who had no problem at all with me doing, or having done, additional work to restore the car. Shannon's only stipulation? If I wanted additional work done over & above what was required to repair the accident damage - then I paid for it, and they didn't! A very fair & reasonable attitude. I spoke to Colin Rule, who agreed to restore the rest of the car - and to keep two separate timesheets - one for the insurance repair; and an additional one for the extra restoration work for me. In the end - believe me - I spent much more than Shannons!! So I now had a restoration on my hands... the next step was to ask 'Uncle' Peter Molloy if he would rebuild the engine & gearbox...

Just to give you some idea of how the black & white car looked before the restoration - here are some pictures taken on my front lawn, less than 8 weeks before the accident. As you can see - it certainly didn't require a restoration.... I took these photos before I drove the car out to the January 1998 Historic race meeting. 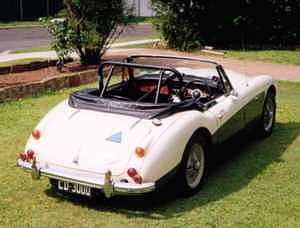 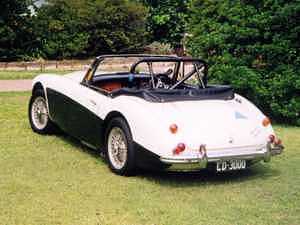 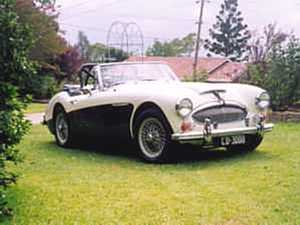 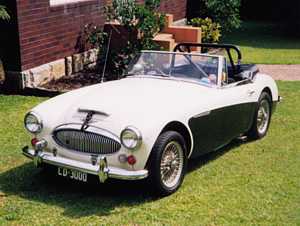