Mike had been a member of the NSW Austin Healey Owners Club around 1970, with his Healey 100 BN2. He had first seen the black & white car when Ian Morgan owned it. Around 1973, Mike moved down to live in Victoria. Mike had kept in touch with Wally (Wally often stayed at Mike's place when he went to Victoria for Calder 6 hour relay races). Mike had also competed at the same 6 Hour relay races as Wally - e.g. in 1974 Mike ran his racing Austin Healey Sprite for the Austin Healey Sprite Drivers Club team (team #7).

By 1978, when Mike bought the black & white car, it had done over 60,000 hard miles. It still looked great - the hood & tonneau were a little worse for wear - and the time was drawing closer to a 'full' engine rebuild. The bore was still standard - as was the crankshaft - and the engine had been 'freshened up' several times during Wal's ownership (rings changed, bearings changed etc with engine in situ; head off & valves reground etc.).

During Mike's ownership, he began accumulating the parts required for a rebuild - another standard crankshaft (which he had tuftrided and drilled for the 8 bolt flywheel); a new steel 8 bolt flywheel was made, new bearings, cam, etc. Mike also imported a new tonneau cover, roof, and hood boot for the car.

But, due to family and business commitments, Mike never got around to rebuilding the engine, or fitting any of the numerous bits & pieces he had acquired for the black & white car. Mike moved to Brisbane not long after - driving the black & white car up from Victoria. Brisbane didn't work out for Mike - so he returned to Melbourne - where he went into business with Paul Trevathen in "MG Broadwalk". During the mid 1980's - Mike built a Group N historic racing Mini - and the black & white car was used as a weekend car.

Wally bought the black & white car back from Mike Holloway on 22 April, 1987. It was still road registered (VIC) AGW-783, and going, and Wally drove it home to Sydney. The Odometer reading leaving Mike's place in Melbourne was 73,252 miles. I remember when Wally brought the car home to Sydney - Wally couldn't believe how the car hadn't really changed in the past 8 years. Mike hadn't altered or changed or 'stuffed around' with anything - it even still had all the 6 Hr relay stickers on the rollbar. It came with all the stuff Wally had given to Mike when Mike bought the car from Wally, plus all the new parts Mike had been accumulating for the engine rebuild.

Although I said it was still registered and roadgoing, and Wally drove the black & white car back from Melbourne to Sydney - I also said that the black & white car had probably needed an engine rebuild some 8 years earlier... That isn't just my opinion - its also the opinion of the Victorian Environment Protection Authority.... Wally managed to get (well - actually - Mike got them, by mail, as the registered owner...) not one, but two EPA infringement notices in Swanston Street, Melbourne, on his trip back to Sydney. One was for noise pollution; and another one for 'excessive smoke exhaust emissions'.... 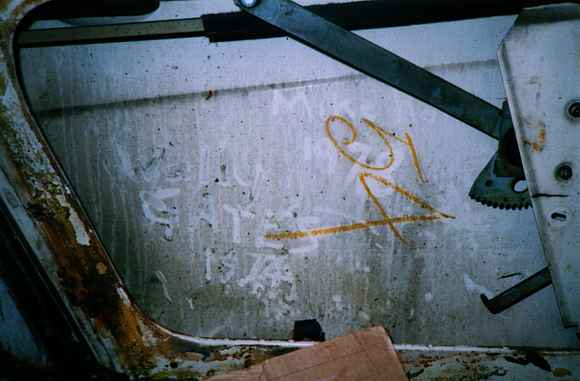